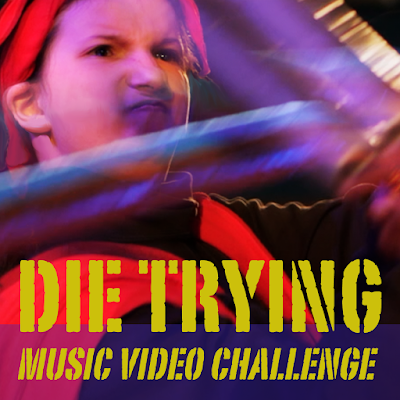 Orphean Circus is excited to announce a music video challenge, co-sponsored by TBD.
Your organization creates its own music video to the song, “Die Trying.” The winner will receivea $100 gift certificate to TBD.

"Die Trying"" is produced and directed by artist and community organizer, Ken Roht. The song is written by high school student, Bailey Howard, through his company, Opportunity Music.

In cooperation with Bard College at Simon’s Rock and the Kilpatrick Athletic Center, Ken Roht brought together more than fifty students, young musicians and community professionals to create a highly theatrical music video. Simon’s Rock Boffing Club, Simon’s Rock staff and faculty, students from Waldorf, Monument and Mt. Everett high schools and others all came together for two days to participate in the music video, featuring the talents of Bailey Howard, son of Berkshire School theater teacher and director, Jesse Howard.

Roht says, This project was inspired by the Simon’s Rock Boffing Club, whose president, student Samarth Agnihotri, was excited to collaborate on something unique and ambitious. Bailey was recommended as someone who could write an exciting song to feature the boffing club. Bailey’s song is great, and all of the young people that perform in this music video are amazing.”

The high school aged band is comprised of Bailey Howard on vocals, Connecticut resident Mary Hannan on guitar, Landon Curletti on bass, and Silas Blacklow on drums. Lydia Helmstadter is the featured love-interest/warrior in the music video.